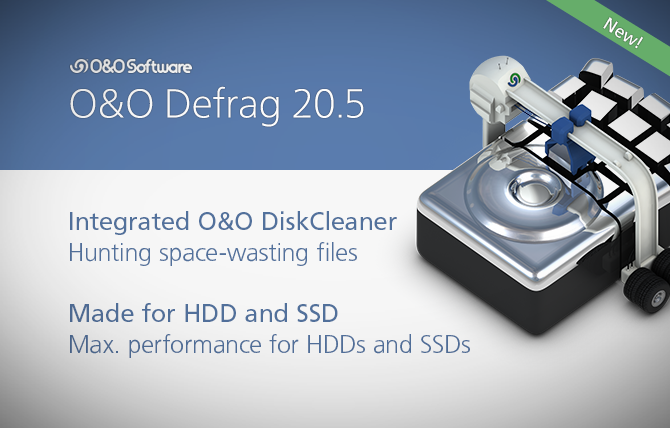 With regards to SSDs, we are often asked if there is a point in defragmenting such drives. This article gets to grips with the opportunities and risks associated with defragmentation.

The internal data management in SSDs does not create a 1.1 assignment of file system sectors to certain storage areas, which was the case with hard disks. This means a large file in the file system that is not fragmented can be split into a thousand blocks by the SSD Controller – without that having a negative impact on performance. A defragmentation would not lead to an acceleration at all. Indeed, the numerous brief write accesses would lead to unnecessary delete-write cycles. Defragmenting SSDs is therefore not only unnecessary but can substantially reduce their life expectancy!

Up until now drives saved all sectors in a file system 1:1. Such sectors are also saved when the operating system marks them as free and when from the user’s point of view they no longer hold any data. If the user deletes files or newly formats a drive, the operating system interprets it as data being disposed of, but the actual content remains stored on the drive.

SSDs also hold this unnecessary sector content available until new data overwrites it. This is where the Wear Leveling algorithm comes in to save wear and tear and increase the lifespan: if a user tells the drive which areas no longer hold data, the appropriate flash blocks could be freed up and used for new data.

Precisely this optimization approach is deployed under the new ATA Standards using TRIM commands. Drives that support TRIM can optimize their internal data management and Wear Leveling. In order for this to work however, the TRIM command has to be transmitted to the SSDs using software.

With the arrival of Windows 7 and Windows 2008 R2 a native support for TRIM commands was integrated. Every time something is deleted this TRIM command is sent from the operating system to the SSD, providing the SSD manufacturer also supports it.

Older Windows versions cannot do this, which means the user has to fall back on manufacturer-specific instructions. These abide by the same standard procedures but often block drives from other manufacturers.

We implemented the TRIM function according to ATA Standards into O&O Defrag to support SSD optimization. This means users of O&O Defrag enjoy a manufacturer-independent and user-friendly solution for optimizing all the drives in their computers – regardless of whether they are SSDs or traditional hard disks.

Defragmenting an SSD does not lead to any performance improvement: it can even reduce the life expectancy of an SSD. This must be avoided either through automatic recognition by the operating system or by a defragmentation software. A regular and automatic run of TRIM commands can substantially increase the performance of an SSD and extend its life expectancy.

O&O Defrag delivers both. That is why it has become the optimization tool of choice for both traditional hard disks and SSDs. With O&O Defrag you get for the first time ever a manufacturer-independent and intuitive program that optimizes any number of your systems drives and hugely increases performance of PC and servers.

This article is a summary of the Whitepaper “O&O Defrag and Solid State Drives”, which can be accessed free of charge for a more detailed analysis.