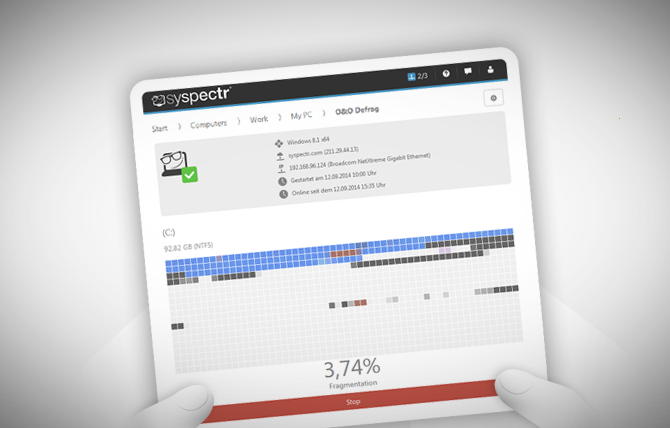 O&O Defrag 18 is here – and now also available in O&O Syspectr. Read on to find out why we opted for this “light” version of O&O Defrag as a web application!

Feedback from our customers is crucial

As we were deciding which new functions should be integrated into the new version 18 of O&O Defrag we took a long, hard look at the feedback gathered over the years from our customers. And the bottom line was this: nothing was missing! This in itself did not come as a surprise to us. We have been developing O&O Defrag now for 18 years and every new version was improved and built upon, be that through new functions, algorithms or native adaptations for new Windows versions or file systems.

One request that we received more and more in recent years was to make O&O Defrag even easier to use. Over time more and more functions were added to the program which of course bring more and more “buttons” into the user interface. We always strive to keep usage as simple as possible but some functions (Zone Filing to optimize files, for example) represented stark changes in concept and required detailed explanations.

Additionally, our customers rightly expect each new version to come with improvements and enhancements. That of course is understandable as a new version costs money – if it offers nothing new then the added value to the customer is restricted. As a manufacturer that represents somewhat of a dilemma, and we are not alone: every new software product comes with a range of new features. The question of course is this: does the customer really need them? I personally do not write better letters in my new version of Word (2013) than I did in the previous version (2010). I also do not write quicker or more interesting text! So despite the fact that the new version actually has lots of new features, I do not really notice or benefit from them (excluding the new design).

The Hybrid approach – powerful yet streamlined

Our dilemma then was how to develop a new version that was simpler than the previous one but at the same time would not fail to meet our customer’s expectations. We could of course provide say two separate user interfaces, as we have been doing for several years now with O&O DiskImage (Express UI with just five buttons or the Pro variety with all functions and tools included). We found that however too easy and not innovative enough. We wanted to take the next big step forward and that is what we have done with the integration in O&O Syspectr: a very simple, streamlined application where one simply has to press a button. The system takes care of the rest.

We call this approach “Hybrid”: we retain the previous user interface of O&O Defrag as a desktop application and yet with O&O Syspectr customers can also use our product over a web browser with just a few clicks. Settings are reduced to the minimum necessary so that new customers can start straight away – install and you’re done.

All possible options over a web browser?

A justifiable question at this point: why can’t I carry out all O&O Defrag functions over the web application? Well, I have good news – you can! Just not the way you might imagine. O&O Syspectr comes with a Remote Desktop. You simply connect with the computer, start O&O Defrag as a desktop application and you have access to all settings and functions. And if you are sitting at the computer then you can start O&O Defrag right away. Our new Remote Desktop function is however a very nice piece of work – and included with no additional costs in O&O Syspectr!

In my next article I’d like to take you “behind the scenes” of O&O Defrag to show you the benefits it brings for today’s PCs. Watch this space!