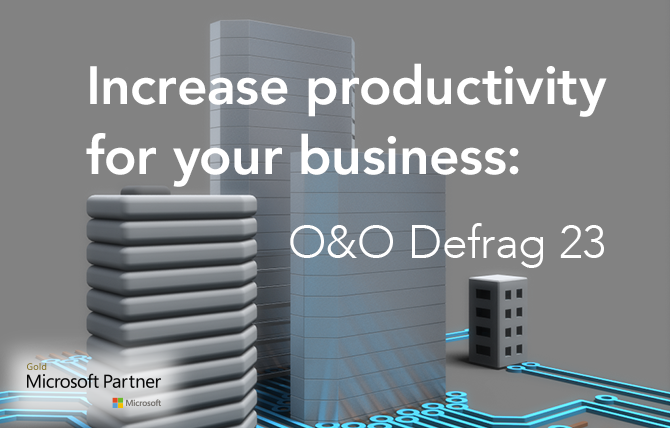 Introducing the latest version of our system performance application with a new method to optimize the performance and lifespan of both SSDs and HDDs.

Our new O&O Defrag 23 Server and Workstation Editions are designed for use in modern data centers. Especially in business use, data that should be available very quickly is these days stored on SSDs. Fragmentation increases these access times. O&O Defrag 23 presents the SOLID/COMPLETE method developed by O&O Software, which enables a significant increase in performance even when used on servers. Due to the increasing use of SSDs in the server area, considerable savings can be achieved by shortening the access times. Small and medium-sized businesses also greatly benefit from the new data center quality of the new O&O Defrag 23.

Windows – and in the case of SSDs, the controller of the SSD – distributes files into individual file fragments when saved, in each case in the next free and “suitable” memory sections, called Pages. In the remainder of this blog entry, I explain why this behavior slows down not only a classic hard drive but also SSDs and ultimately leads to an unnecessarily early failure of the storage medium. And I’ll explain why defragmenting an SSD is not a no-go, as is still popularly claimed, but on the contrary: the average life of an SSD is extended by defragmentation using the new SOLID/Complete and SOLID/Quick methods in O&O Defrag 23.

Files are often stored in pieces (fragments) onto the disk or onto the file system. The size of the fragments depends on the cluster size of the respective file system (normally 4KB in NTFS). Let’s assume a block on our SSD is 128KB and a file (128KB) that is split into 32 fragments needs to be saved (you recall, each fragment will be 4KB large). In the worst-case scenario, this would then have to be saved on 32 different blocks. If this file had only one “fragment”, one single block would be enough. The problem then with writing such a fragmented file: The controller has to find 32 FREE blocks and, in the worst-case, delete them all. Then it must write to these 32 blocks as well – and this must happen every time a file is changed too! Due to the increasing use of SSDs in the server area, considerable savings can be achieved by extending the service life of SSDs.

The problem: SSDs store file fragments spread across many blocks, even though much fewer would suffice.
This memory behavior has an immediate effect on the performance and lifespan of an SSD. To counteract wear and at the same time to optimize the performance of SSDs, O&O Software developed for version 22 the new defragmentation method SOLID. By using the defragmentation method SOLID, these distributed file parts are defragmented so that in the future significantly fewer memory cells have to be read out and also written to when changing a file. As a result, the SSD is faster as the number of read and write accesses is reduced by the defragmentation. In addition, the premature wear of the SSD (and of course the conventional hard drive) is prevented because fewer blocks need to be erased and rewritten than before the defragmentation with SOLID. To stay with our example above: To read our sample file, it is not necessary to first access and read 32 different blocks, but only a single one.

The new defragmentation method SOLID/Complete: SSDs save file fragments on morememory cells than needed. The resource and hardware friendly SOLID/COMPLETE method defragments these file fragments so that only the number of memory cells required will be used for reading and writing in the future. SOLID/COMPLETE can be used on both SSDs as well as hard disks. SOLID/Quick: This method, developed specifically for SSDs, performs a superficial optimization of the SSD, such as erasing the free space. This method is gentler and faster.

The most comprehensive system performance application for all your disks

A positive side-effect of developing the defragmentation method SOLID has been found in tests on “classic” hard disks: it is O&O Defrag’s most resource and hardware-friendly defragmentation method ever, with optimal results, and sets the new standard for defragmentation. As we mention above, files are also fragmented on SSDs. Data is often distributed to more memory cells than would be necessary. By defragmenting an SSD using our new method SOLID, it is possible to reduce the number of cells used to store file parts down to significantly fewer. This ability to optimize and protect both disk types is a prerequisite for today’s data centers that handle mass data per second, and where downtime costs a significant amount of money.

Let O&O Defrag 23 optimize your hard disks and SSDs, and you will get more speed while at the same time saving money on your hardware.