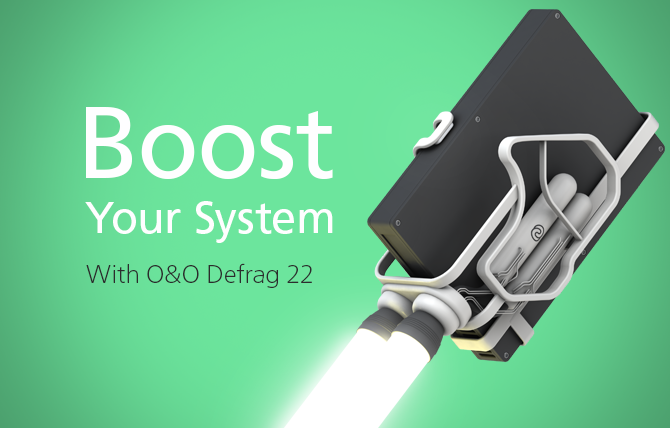 Introducing the latest version of our tuning application with a new method to optimize the performance and lifespan of SSDs.

Our new O&O Defrag 22 Pro is now available with some groundbreaking new features!

Windows – and in the case of SSDs, the controller of the SSD – distributes files into individual file fragments when saved, in each case in the next free and “suitable” memory sections, called Pages. In the remainder of this blog entry, I explain why this behavior slows down not only a classic hard drive but also SSDs and ultimately leads to an unnecessarily early failure of the storage medium. And I’ll explain why defragmenting an SSD is not a no-go, as is still popularly claimed, but on the contrary: the average life of an SSD is extended by defragmentation using the new SOLID method from O&O Defrag 22.

Files are often stored in pieces (fragments) onto the disk or onto the file system. The size of the fragments depends on the cluster size of the respective file system (normally 4KB in NTFS). Let’s assume a block on our SSD is 128KB and a file (128KB) that is split into 32 fragments needs to be saved (you recall, each fragment will be 4KB large). In the worst-case scenario, this would then have to be saved on 32 different blocks. If this file had only one “fragment”, one single block would be enough. The problem then with writing such a fragmented file: The controller has to find 32 FREE blocks and, in the worst-case, delete them all. Then it must write to these 32 blocks as well – and this must happen every time a file is changed too!

NEW: SOLID, a brand-new defrgamentation method for SSDs and HDDs

The problem: SSDs store file fragments spread across many blocks, even though much fewer would suffice.
This memory behavior has an immediate effect on the performance and lifespan of an SSD. To counteract wear and at the same time to optimize the performance of SSDs, O&O Software has developed the new defragmentation method SOLID. By using the defragmentation method SOLID, these distributed file parts are defragmented so that in the future significantly fewer memory cells have to be read out and also written to when changing a file. As a result, the SSD is faster as the number of read and write accesses is reduced by the defragmentation. In addition, the premature wear of the SSD (and of course the conventional hard drive) is prevented because fewer blocks need to be erased and rewritten than before the defragmentation with SOLID. To stay with our example above: To read our sample file, it is not necessary to first access and read 32 different blocks, but only a single one.

The most comprehensive tuning application for all your disks

As we mention above, files are also fragmented on SSDs. Data is often distributed to more memory cells than would be necessary. By defragmenting an SSD using our new method SOLID, it is possible to reduce the number of cells used to store file parts down to significantly fewer.

Let O&O Defrag 22 Pro optimize your hard disks and SSDs, and you will get more speed while at the same time saving money on your hardware.

Don’t just take our word for it! Grab your copy now in our Online Shop, or alternatively test it for 30 days now on your current Windows system – free of charge and obligation. As well as the new functions, the old and trusted features for speeding up your PC and extending the lifespan of your hardware are all there too.