HDDs vs SSDs: Why defragmentation is still crucial for you 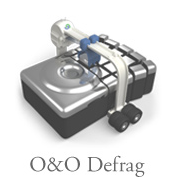 As the leading manufacturer of O&O Defrag, a tool designed to put the pieces of fragmented files back together again, the rising popularity of SSDs is a subject we have been following very closely.

In this blog entry, I would like to present some facts to you. I will also bust a few myths on the topic.

SSDs and HDDs do the same thing – they boot your systems and store your data. So what is the current situation?

Advantages/Disadvantages – is one better than the other?

It remains very unclear whether SSDs will totally replace traditional hard drives, especially with shared cloud storage on the scene. The price of SSDs is coming down, but still not enough to totally replace the TB of data that some users have in their PCs, Macs and servers. HDDs will continue to be the preferred storage for years to come. New customers may be buying hardware with SSDs built-in for faster system and program starts, but HDDs will still be the primary choice when it comes to large storage capabilities as needed for music or video files. Especially since the speed advantages of SSDs are of minor importance for video or audio streaming. Existing HDD users will therefore be very reluctant to change a running system, especially across whole networks.

So everything is new, but nothing has changed – at least not dramatically. What does this mean for you? It means you most likely still have HDDs. These HDDs still suffer from fragmented files, slower boot and response times, and hard-working moving parts that wear. So these HDDs still need to be defragmented.

You would like to get more in-depth information about SSDs, their use with Windows 8.1, Windows 8, Windows 7 and XP, and what O&O Defrag can do for you? Then read our free  Whitepaper: O&O Defrag and SSD (pdf, 116 KB) .

Andreas Blaeser has been with O&O Software since November, 2006 and was appointed Director of E-Commerce in 2018. He has built up the E-Commerce business for O&O Software and is responsible for expanding sales through all electronic channels.